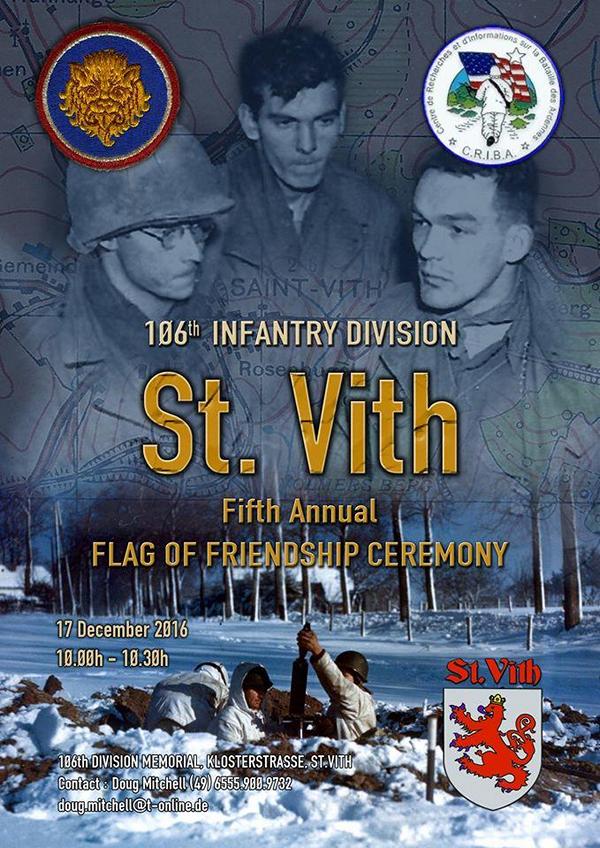 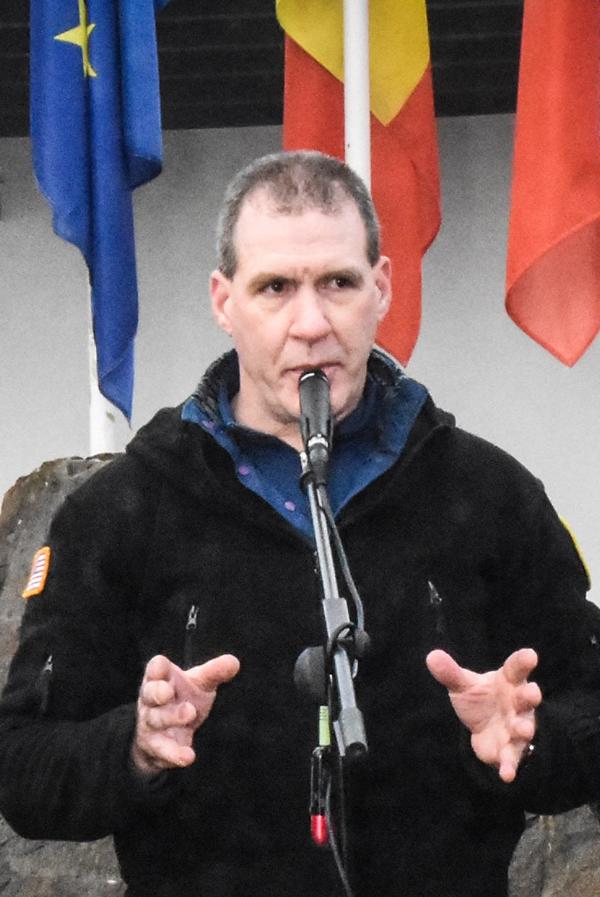 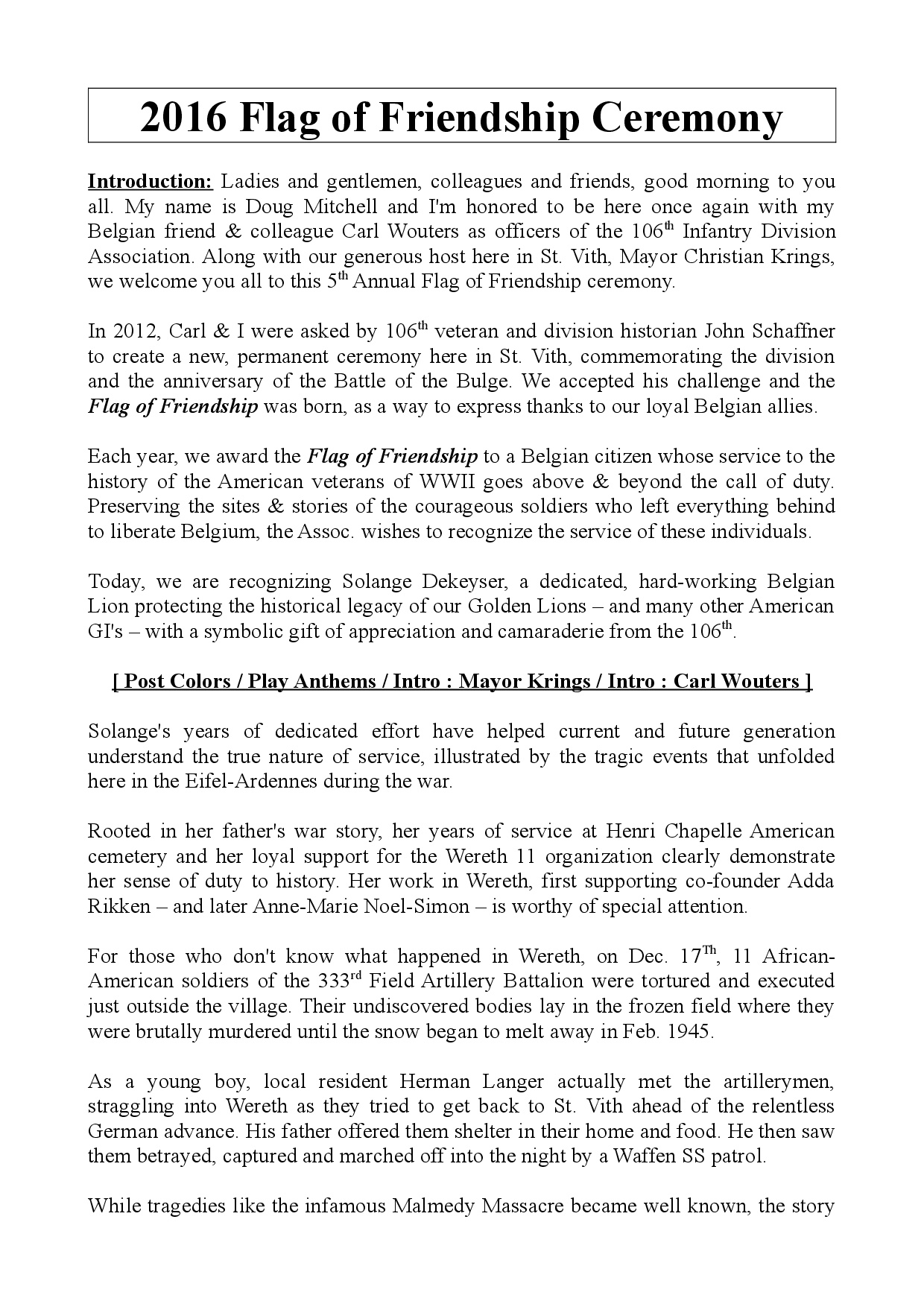 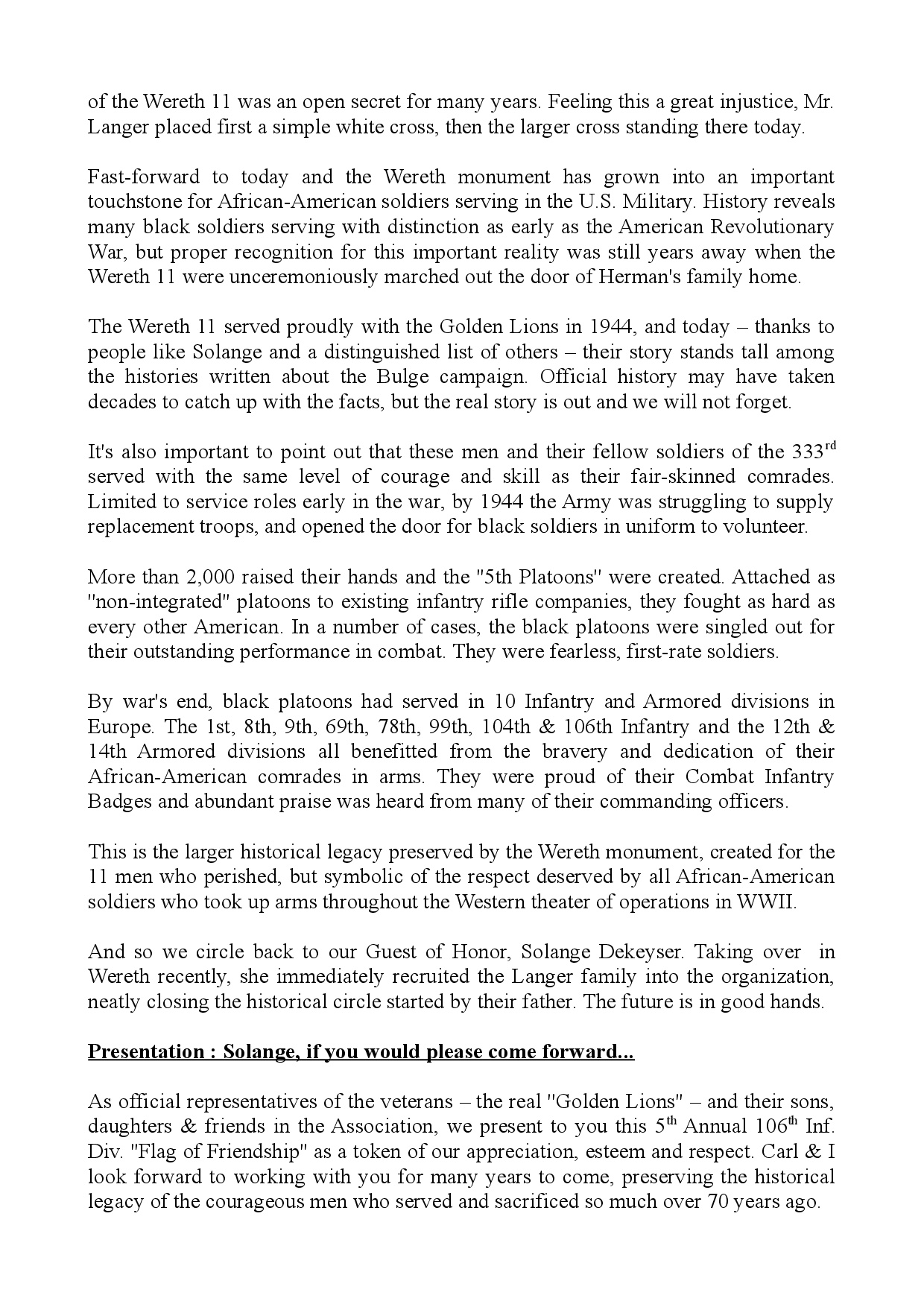 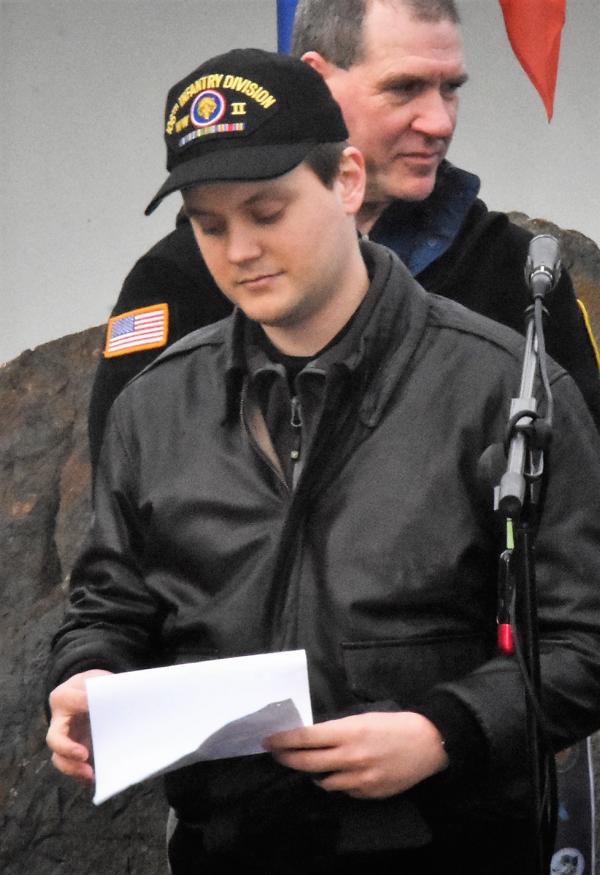 In name of the 106th Infantry Division Association and its Bulge Chapter we thank you for your presence today to honor the memory and legacy of the men who served with the Golden Lion Division.

Exactly 72 years ago today, the German counteroffensive we now know as the Battle of the Bulge, was one day old. It was a most crucial day for the Division, as on the morning of 17 December 1944 the German army succeeded in completing an encirclement which trapped nearly 7,000 troops in the Schnee Eifel, just a few miles from here. It was the day when the war yet again reached the city limits of St Vith and engineers and clerks from division headquarters were perched on the Prümerberg to form a last line of defense against the German attack. The battle proved to be costly, bloody and gritty. The fighting in the area carried on till late January 1945, but the war itself would not end until May

War makes no distinction in ages or upbringing, it affects all those involved. It affects the men on the frontlines, who go through the trauma of battle, facing the enemy machine guns and artillery barrages. It also affects the local people who live in the villages and work the fields where the battle is fought as often their lives and livelihood is destroyed by the unrelenting chaos of battle.

Over the course of just a short six month period approximately 700 men of the 106th Division perished. A terrible human cost. Each of them was someone’s son, father, husband or brother

I would like to pay tribute to a few of them. Firstly I would like us to remember Clifford J. Burrus from Meckling, South Dakota. When he first volunteered for military service, he was rejected because of physical standards. Due to an accident, Cliff had no index finger on his right hand and suffered from a double hernia. Yet, determined and proud to serve his country, he entered the service in 1943 when standards were lowered. As a 29 year old private, he was already considered to be ‘an old man’ in comparison to the rest of the 18 and 19 year old GI’s in his unit. His company was called to action at Winterspelt, where he died on 17 December 1944 along with twenty of his comrades. Cliff, the soldier without a trigger finger, was last seen firing away with his rifle before his position was overrun. It wasn’t until 1946 when his grieving wife received confirmation about his death

Then there is the story of William H. Gordon Jr., a young 24 year old lieutenant from Maryland. He volunteered for the service while he was at John Hopkins University, becoming a combat engineer officer. He was taken prisoner on 18 December 1944 in Schönberg. After spending several months in a German POW camp, on April 5th, 1944 he was among a group of captured American officers on a forced march

through the suburbs of Nuremberg, Germany. It was near the very tail end of the war. That day 1,000 B-17 bombers reduced the city to ashes. Lieutenant Gordon and his group were caught in the bombing. He left a wife and a newborn son, born just three weeks before. Lieutenant Gordon never got to meet his son

They believed in doing their duty, in serving for a worthy cause: to help restore peace to the world. They all had hopes and dreams for the future: to start a family, continue their education, or to return to their jobs and pick up their lives as before, but simply never got to live these dreams. They died in a foreign country, half a world away from their loved ones.

But they are not gone as long as they are remembered. And that is the duty we have to them.

Thank you and God bless you. 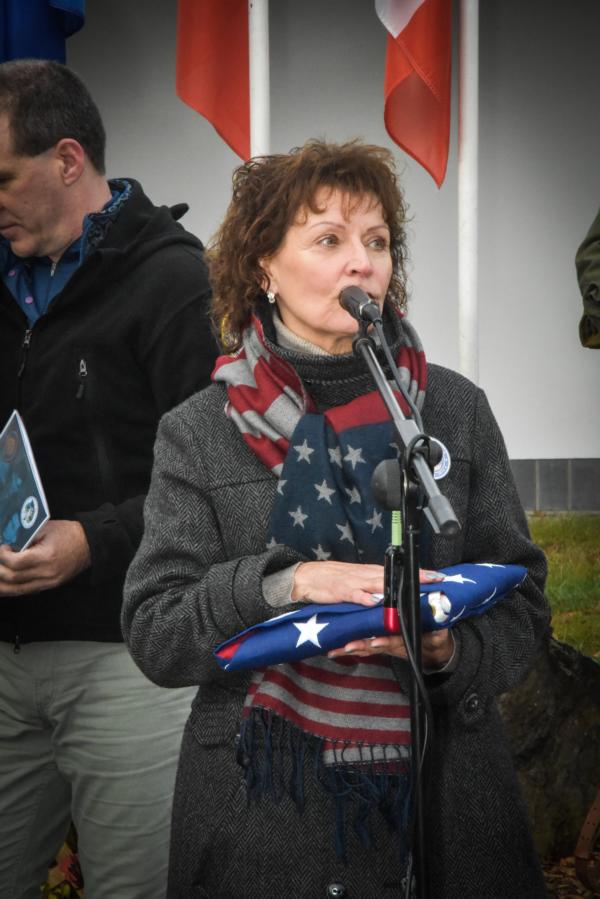 Many thanks Carl Wouters and Doug Mitchell of the Belgian Chapter of the 106th Infantry Division Association. I would like to include our association U.S. Memorial Wereth to this great event. Among us we great the Major and the Alderman of Sankt- Vith.

It’s a great honor for us to receive the fifth “Flag of Friendship” from their hands. The name “Flag of friendship” indicates that the team of the Belgian Chapter of the 106 Infantry Division association has the same goal than the U.S. Memorial Wereth: preserving history to be erased by the memory of time.

This monument here is related to Hermann Langer’s memorial to soldiers of the 333 Field Artillery Battalion by the fact that this battalion came in support to the 106 Infantry Division. They fought together, got hurt together, were captured or even died together. All these men came to Europe, to our small land of Belgium to fight for OUR freedom. Many of them made the ultimate sacrifice for us: they gave THEIR LIVES. It’s our duty to always remember and to do our best to immortalize what they all came through. Forgetting them would be killing them a second time.

Again thanks Carl, Doug, the Spangdahlem Color Guard, the flag bearers and all of you for supporting our duty of remembrance.