WASHINGTON – As we near the 69th anniversary of one of the decisive battles in Europe during World War II, U.S. Reps. Jim Gerlach (PA-6th District) and Chaka Fattah (PA-2nd District) have introduced

a resolution that would formally recognize the valor and sacrifice of 11 black soldiers captured, tortured and ruthlessly executed by Nazi troops in a pasture in Wereth, Belgium on the second day of the Battle of the Bulge.

The resolution, H. Con. Res. 68, also calls on the U.S. Senate’s Armed Services Committee to revise a 1949 subcommittee report to include an appropriate recognition of the massacre of the 11 black soldiers of the 333rd Field Artillery Battalion of the U.S. Army who were beaten, stabbed and shot multiple times at the hands of their Nazi captors almost seven decades ago on December 17, 1944. The original subcommittee report documented a dozen similar massacres during the Battle of the Bulge, but did not include any reference to the killings in Wereth.

The 11 soldiers massacred, known as the “Wereth 11”, were: Curtis Adams of South Carolina; Mager Bradley of Mississippi, George Davis Jr. of Alabama; Thomas Forte of Mississippi; Robert Green of Georgia; James Leatherwood of Mississippi; Nathaniel Moss of Texas; George Motten of Texas; William Pritchett of Alabama; James Stewart of West Virginia; and Due Turner of Arkansas.

“Our country shall be forever grateful to every member of the ‘Greatest Generation’ who contributed to the defeat of fascism in Europe and laid down their lives so that future generations could enjoy the blessing of freedom,”Gerlach said. “Every now and then, it takes history a while to accurately reflect the monumental moments that have helped chart its course. That’s certainly the case with these 11 black soldiers who courageously fought on the front line in the Ardennes against a relentless enemy and eventually made the ultimate sacrifice for their fellow soldiers and our nation. This resolution is a tribute nearly seven decade overdue. And it is indeed a privilege to work with my colleague, Congressman Fattah, to ensure that the story of the exemplary service and incredible sacrifice of these 11 black soldiers is always remembered.”

Fattah added: "The valiant efforts and unequal sacrifice of the Wereth 11 soldiers deserves to be commemorated in our country’s history. These are men whose heroic story has been lost to time, but whose names must be honored, and whose accounts we must share today and into the future. I am proud to join with my colleague Rep. Gerlach in paying reverence to their courage and bravery, recalling their lives of service, and ensuring their story fighting for freedom over tyranny is told for decades to come."

Historians note that that the Battle of the Bulge began December 16, 1944 as Nazi Germany launched an aggressive assault on American and Allied Forces in Belgium in a desperate attempt to shift the momentum of the war back in Germany’s favor. While Nazi tanks and troops initially overran many battalions, American and Allied Forces rallied and eventually prevailed in Belgium, advancing into Germany and toppling the brutal Nazi regime.

A 1949 Senate Armed Services Committee documented and investigated 12 incidents of Nazi troops massacring captured American troops and Belgian civilians during the Battle of the Bulge, but the Committee’s report omitted the killings in Wereth, and history nearly overlooked the horrific deaths of the 11 members of the 333rd Field Artillery Battalion.

Wereth resident Herman Langer, whose father had provided bread and shelter from the bitter cold to the 11 African-American soldiers just before they were captured, was the first to formally pay tribute in 1996 by placing a cross in the pasture where the massacre occurred.

Fifteen years later, Norman Lichtenfeld, the son of a Battle of the Bulge veteran, helped raise money to buy the property and erect a permanent memorial in Wereth. 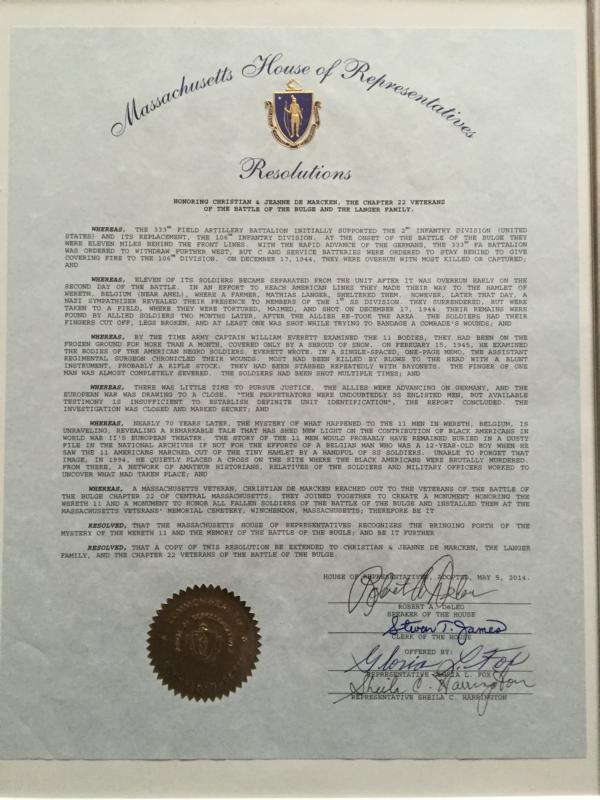